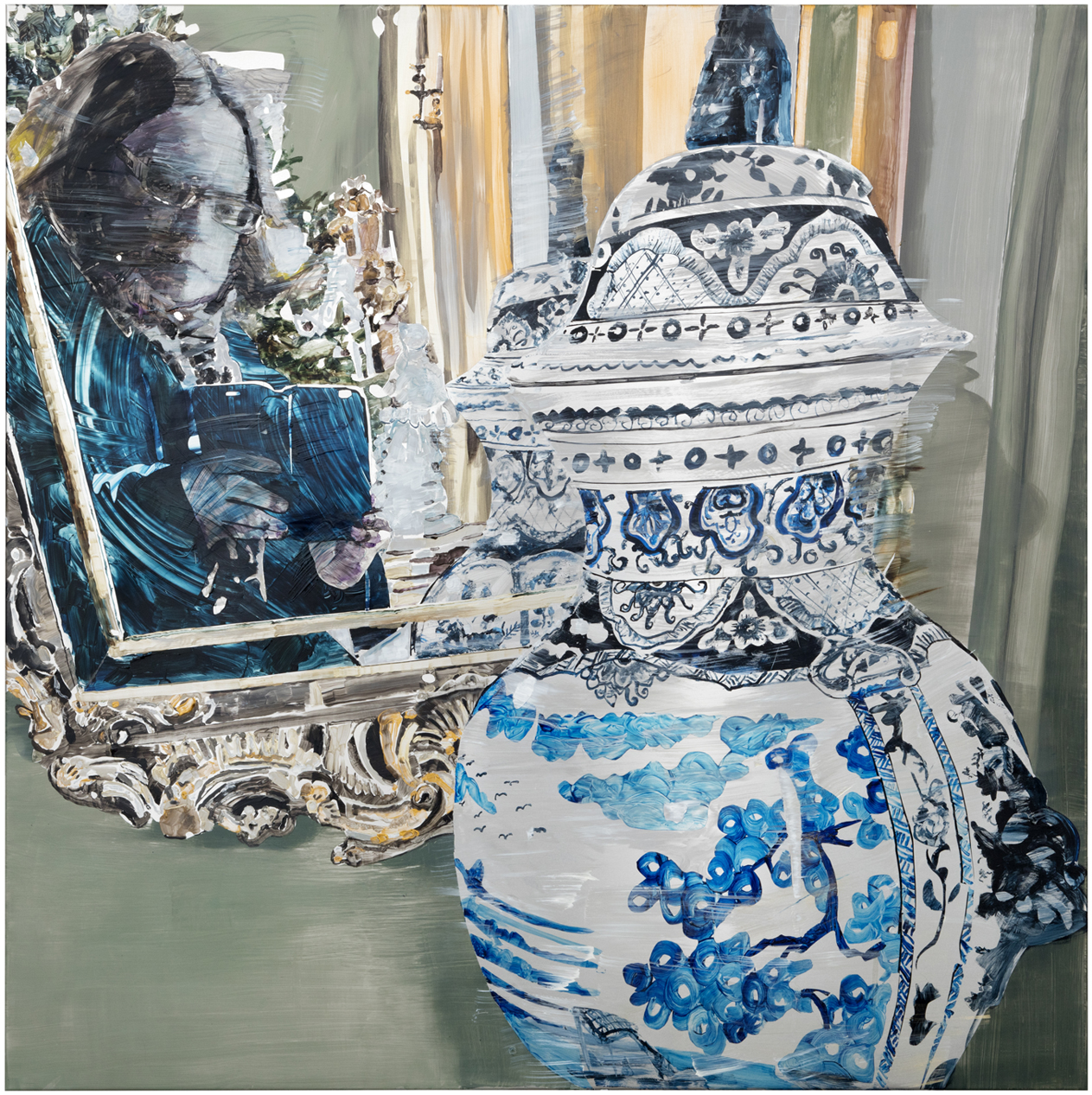 Some paintings make an impression at first sight. One of these paintings once caught my attention right at the parade place in an exhibition at the Wäinö Aaltonen Museum, Turku. In the painting, a man cleans a chainsaw in the light of a fire blaze. The atmosphere was so palpable that I paused to enjoy it: a quiet moment with the chores, the sounds of the fireplace and the warming cottage, the dim light of the cottage, and the slightly damp scent of a late autumn evening. I was so interested in the painting that I memorized the name of the artist – Erika Adamsson. It was 2004 and the title of the work was Vuosihuolto. I have returned to this work several times over the years. Its atmosphere soothes me and brings a deep sense of peace, security and well-being.

The next painting that got stuck in my mind was on an invitation card I kept on my desk for a long time. A shallow, anonymous shopping mall built in the 1960s in the bluish light of a winter day. I cannot really say what fascinated me in the picture, but I have enjoyed watching it often and for long over the years. It was not until later when I read somewhere that the painting depicts a crime scene and that there is a whole series of them. I found that crime scene motif a bit strange, but the picture fascinated me. The artist was Erika Adamsson. The name of the painting is Pikaistuksissa tehty, Lehtimäki, and it is from 2010.

The art museums also hold exhibitions with their own collections regularly, as does Wäinö Aaltonen Museum in Turku, whose collection exhibition from 2014 was called Adidasmies ja Voimanainen. On the invitation card there was a picture of Erika Adamsson’s Adidasmies. Again, I saved the card for a long time and watched Adidasmies – an old man walking with a rollator along the shiny, waxed floor of a care facility corridor. In the painting, the man moves forward with his back turned towards the viewer, and the way of shooting offers such great tenderness towards the subject that the viewer is deeply moved. The viewer can hear the echo of the corridor and the voices of the caretakers in the distance, as well as feel the smell of the man’s clean clothes and the remains of lunch while the dishes are being collected in the dining room.

I am into, or at least was into watercolor painting. One summer, the Åbo Svenska Arbetarinstitut organized a short course in urban painting around the bank of the Aura River. The teacher was Erika Adamsson. After hesitating for a long time, I signed up for the course. I was very interested to learn under the guidance of the artist I admired, but at the same time, I was scared. To my disappointment, however, the course was not held.

Later, I met Erika through a mutual friend, and I also have been able to enjoy her lessons. I have had interesting discussions about art with Erika. One of our common admiration subjects is David Hockney, whose paintings we have seen when travelling abroad together. We have also done small art excursions in Finland. We have visited several home museums where we have admired various sceneries, interiors, artifacts and details.

One of Erika’s paintings, from a few years ago, is called Chinese Vase and it depicts the interior of the Ett Hem museum in Turku, as well as people and the Chinese vase on display in the museum. For some reason, I was fascinated by this vase, and when I visited the museum, while Erika presented a portrait of the house lady, painted by the late 19th century artist Elin Danielsson-Gambogi also looked at the vase. Behind the vase, there is a gold-framed mirror where the vase is reflected. I thought I would take a photo of it with my phone, and while I was looking for a shooting angle, I saw myself in the mirror. I took a photo of myself with the vase. I shared the picture on social media telling about my museum visit. The surprise was great when I saw my photo as a painting in Erika’s exhibition at the Forum Box. I did not know my photo inspired her. The painting is on display in Erika’s exhibition Nostalgy here in the Tikanoja Art Museum. Its name is Perception. I could not imagine a better portrait of myself.

I wish everyone a good visit in the exhibition and interesting observations about art. Art is at its best when it opens up your perspective.